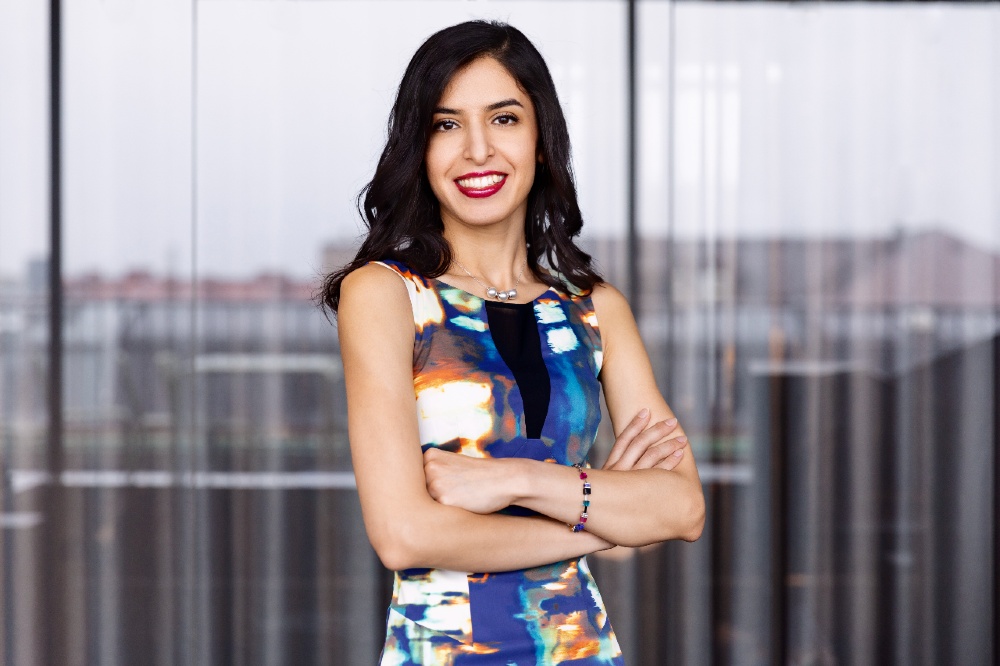 Q. You are CTO of UniqueSec and chair of IEEE SA P3116. Please briefly introduce yourself to Korean readers.

A. I graduated top of my class in B.Sc. and M.Sc. of Communications Engineering, and after a year of teaching at university, I was snapped up by a Swedish startup in the area of radar signal processing, UniqueSec AB.
The problem to solve was all the way from RF to baseband, and from antenna to signal processing. So, I was always engaged with the whole problem; from the beginning to the end, which gave me a big picture and view on the subject.

Evaluating our radar solutions in the adverse weather of winters in Sweden was difficult and this sparked the need for an in-lab testing system. Using signal processing and radar knowledge in my toolbox, I invented a system for generating virtual targets in spectrum domain. And I made the first prototype of it in 24 GHz with all available equipment in our lab. To my surprise, the first patent application on this technology, named ASGARD, was granted within 9 months given that the method is unique and unorthodox in radar testing field.

ASGARD invention changed the company’s business to automotive radar testing, where I became familiar with IEEE Standardization Association activities in automotive area. In 2018, I saw the missing place for automotive radar standard and since then I have been active in forming an international alliance to start such standardization effort. Since it has started last year, I am the leader for radar testing in IEEE P3116.

Q. The words such as Radar alone can't do it, Camera can do it alone, Lidar should be added, etc. may be due to the limitations of radar in some way. On the other hand, some say that the cost advantage should make radar a key sensor in all areas of the autonomous driving level. What do you think about it?

A. The fact is, all sensing technologies including camera, lidar and radar, have their own limitations. Neither of these sensor can work alone in all situations. So I believe some sort of redundancy is always needed to ensure that the reliability we expect in automated driving can be achieved. Radar is the least expensive sensor on a car after ultrasonic, but it has other strong points which make it a key and critical sensor on vehicles; it measures distance and speed directly with a good resolution; it operates at night and its performance degrades less by harsh weather conditions compared with other sensors.

However, radars can be limited in angular resolution and Field-of-View. Recently new radars, called 4D or imaging radars, provide a high-resolution perception of the surrounding which is comparable with lidars, only at a fraction of price. In general, radars are dependable and robust sensors, a must-have for higher automation levels.

Q. Improvements such as imaging radar are being made in the radar scene. As autonomous driving advances, the reliability of radar should be higher, but I know that radar still has problems such as false positive, low angular resolution, and mutual interference. You said radar is the most reliable sensor for level 4 and above. Why? How can we further improve radar performance?

A. There are huge advancements in radar technology which not only have improved their performance, but also take radars to a whole new level. New radars are said to see around the corner. One of the trends is the use of large transceiver channels, for instance 48 or 72 channels, in many new-coming radars, leading to very large virtual arrays of antennas which improves angular resolution. Another method is using different radar signals such as PMCW (Phase Modulated Continuous Wave) that makes the radar less susceptible to interference. New antenna technologies, like meta materials and gap antenna also help achieve higher angular resolution with wider FoV. Some new radars even utilize multiple ISM bands. So the radar signal is not designed only for one frequency band, e.g. the typical 76-81 GHz, but it contains signals from below 10GHz to 77GHz range. This reduces the risk of interference, reduces false detections and increases availability of the sensor.

As you know, higher automation levels demand higher accuracy, resolution, reliability and dependability. I think future generation of radars is ahead of cameras and lidars in these aspects.

Q. I am writing articles about the role of AI in the automotive industry. How, where, and how much can AI contribute to improving radar performance?

A. AI is and will be a big part of the future of sensor development especially in radar domain. AI and machine learning are powerful tools for target association and tracking in radar post processing. Training AI, or a neural network, depends heavily on training data. For cameras, training data can be collected and annotated ? by human eye. This is a challenge for radars. Firstly because the 2D signal of radar cannot be comprehended by human eye. And secondly, when recording a real scenario by a radar, you can never know how much of the scenario the radar captured in its signal. Radar target simulators, are practical to produce high-quality annotated data thanks to the ground truth reference. Uniquesec’s ASGARD system is an example of such simulators which can generate quite realistic annotated data for radar-based AI systems in autonomous vehicles.

AI has a lot of possibilities for further development; by applying heuristic information into its training. For instance, in case of radar tracking, it is helpful to use map information.

Q. How are radar testing methods improved, with what needs? How important is this to improving radar performance, autonomous driving? why do we need the IEEE SA P3116 standard now? Is it because it relates to other standards progress like NCAP, ASAM?

A. For testing a complete automotive radar, with its hardware and software, over-the-air (OTA) testing is necessary. The most commonly used method has been driving expeditions, where the tests happen in a controlled situation with a human driver involved. This is not particularly helpful for evaluating radar performance in dangerous situations and accident scenarios; besides, there is no access to ground truth data and the tests are not reproducible.

In recent years, radar target simulators are advancing for this purpose. They enable repeatable in-lab testing with access to ground truth.

Typical RTS technologies are based on implementing time delays and are originated from military. They used to be and some are still limited in certain features, for example number of virtual targets or minimum range of targets. Newer technologies, such as UniqueSec’s ASGARD offer more flexibility in terms of number of targets,  minimum distance, etc. which makes it better suited to automotive radar validation.

Certain requirements for RTSs are more highlighted as the need for thorough testing of radars and radar-based ADAS/AD functions increases. Creating targets with high angular resolution and Hardware-in-the-Loop (HIL) testing are two of them. There is a shift from mechanically rotating antennas towards using larger antenna arrays, such as Keysight’s solution, and MIMO methods for electronic angle generation in Uniquesec’s approach.

Near to radar operation, size of RTS, as well as real-time operation are key requirements for HIL testing. I know many solutions that need a 1-2 meters space, causing challenges due to space limitation in test beds. ASGARD can operate in very close vicinity to radar under test, e.g. 20 centimeters. We have successfully integrated it for closed loop HIL testing of Bosch radar on a Porsche last year.

We are at a point where many new radars are emerging, ADAS is moving towards automation and fully autonomous vehicles, a lot of questions and concerns are being raised about the safety of automated driving, and the society needs to trust this technology. Also, there are many standardization activities by different bodies addressing various aspects of automated driving, such as test scenarios, camera image quality (P2020), assumptions in automated driving, etc.

Radar performance, however, is not specifically addressed by NCAP, ASAM, ISO or other standards. Standardization on spectrum usage and frequency band of automotive radars is done by ETSI and FCC. IEEE P3116 for automotive radar performance metrics and testing methods started (by three corporations from three continents) to define minimum requirements on radar sensors for ADAS/AD applications. We have participation of industry leaders such as NI, CAERI, UniqueSec, Keysight, Qualcomm, Infineon, ZF, NXP, Huawei, Spartan radar, Yokosuka Telecom Research Park, and Cloudwalk. 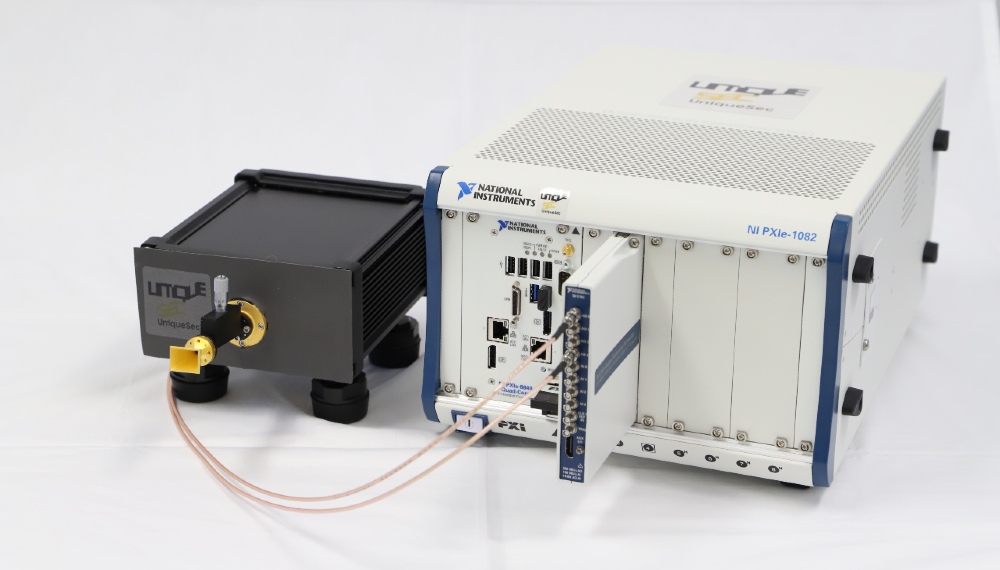 
Q. Please also introduce ASGARD1 of UniqueSec. Could I interpret the fact that you and your company are playing an important role in this standardization activity to mean that the solution is just as innovative?

A. ASGARD is a radar target simulator which emulates radar echos by manipulating radar signal in spectrum domain. The radar target signature is represented in frequency and it will be added to the radar signal without any down-conversion and delay. The technology for this frequency-based RTS is patented by UniqueSec around the world, including South Korea.

ASGARD has a digital back-end, an RF front-end and the state of the art software. You can see ASGARD in front of an Aptiv production radar in the picture.

P3116 is going to define performance requirements on automotive radars in different use cases, radar types, scenarios, and for all automation levels. Of course, verifying and evaluating radar performance places a huge burden on the standard, which calls for innovative methods in radar performance analysis.
This standard is going to be instrumental for the future of automated driving since radar sensors are integral for ADAS and autonomous vehicles. 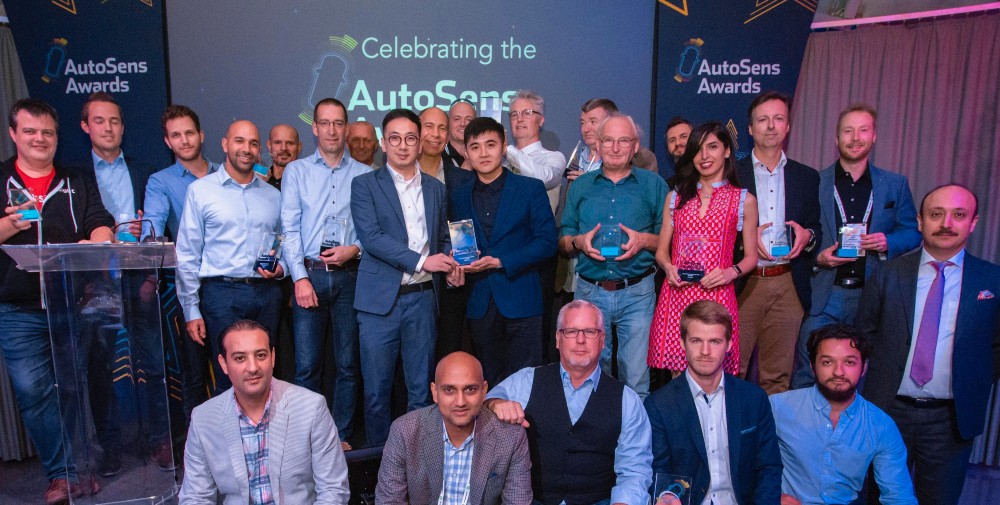 
Q.  The IEEE SA P3116 Working Group started last year, right? Short, but formally and informally, what are the discussions so far and future developments?

A. Yes, the proposal for this standard was approved by IEEE SA last September and the initial meeting was held in December. So far, we have discussed the procedure, DOs and DON’Ts for standard development in IEEE SA. We are in the process of creating the table of contents now and have agreed about the main pillars of this standard will contain. At a quick look, it includes (i) static performance metrics, (ii) dynamic and scenario-related performance metrics, (iii) interference and (iv) radar testing methods. Based on this, four subgroups of IEEE P3116 are finalizing the table of contents in the next few months. The standard is planned to be developed in five years. I believe it is a big effort which calls for participation and contribution from all stakeholders and experts of the field.

Q.  There are so many Korean and foreign companies related to radar in Korea. but, Is there any participation of Korean companies or other stakeholders in the standardization work?

A. We don't have any Korean participation in P3116 working group yet. Thus, I’d like to take the opportunity and invite all Korean OEMs (e.g. Hyundai), Tier-1s (e.g. Mando), Tier-2s (e.g. LG electronics), research and/or standardization institutes to join our efforts in P3116 working group.

Q.  Tell us about the reputation of UniqueSec and its solutions in the global and Korean automotive industry. Finally, what would you like to say to our readers in Korea regarding UniqueSec's business and IEEE SA P3116?

A. Uniquesec has a global footprint in automotive radar testing market. We work with many international OEMs and tier-1s, test system developers and research institutes. Our two main markets are Germany and Japan. We are expanding our presence in all automotive markets specifically China, US and South Korea.

We are very keen to offer our leading-edge ASGARD system to Korean automotive  industry and know about their testing demands in any use-case:
In-lab radar test and verification for OEMs and tier-1s,
Radar-based function testing with Over-The-Air HIL testing (e.g. in ACC or AEB),
Radar End-Of-Line test and calibration for both OEMs and Tier-1s,
Synthetic training data generation for AI and deep learning used in radars as well as autonomous vehicles.

ASGARD1 used in testing a production radar from Aptiv 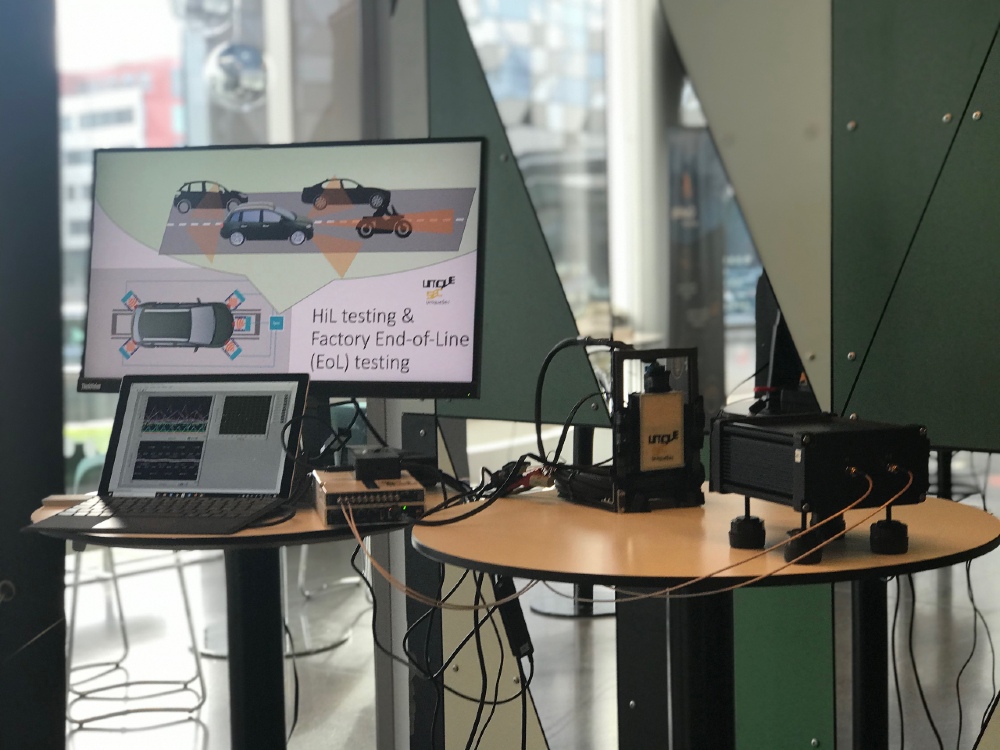